As Ubuntu users know, Unity desktop shell had HiDPI displays support since 14.04, however while the unity shell has been able to scale at any fractional value (despite we limited the setting to only 8 values per integer), GTK3 and GNOME Shell just supported integer scaling values.

Although I see the technical reason for that (pixels can’t be divided!), I think that our approach still worked quite well by using proper round functions, as it’s really hard to notice the visual flaws that this introduced at such high resolutions.

At the same time, to get proper scaling for GTK apps, we used the stratagem of mixing the UI scaling with the text scaling factor, so that the multiplication between the two values will match the user-requested scaling level.
This worked pretty well in single-monitor instances, while in multi-monitor environments the idea was to use xrandr scaling to get matching results, but this has not been done, mostly due to an X11 bug which didn’t allow to go further…

Anyway, this is the past and present, but let’s talk about the future… Ubuntu will use GNOME Shell (in Wayland, when possible), and so far there’s no support for multi-monitor scaling or fractional scaling, but things are changing!

Jonas Ådahl is leading this efforts and he started with supporting a new configuration API for monitors, that is a prerequisite for pursuing the GNOME Fractional Scaling initiative.
Basically, the main implementation idea is to make GTK and various toolkits to scale at an higher value, and then using mutter to scale actors down at composition level.
While it might be a little more resource intense, it’s also true that this will work nicely (especially in multi-monitor environments with different scaling values) and that there’s no other option, given that GTK scaling system can’t be changed at this point (too many things now assume it’s an integer).

Ubuntu cares about having a proper HiDPI support in next releases, so the Desktop Team decided to join the upstream initiative, and since I’m currently around asia, we’ve organized a GNOME Hackfest, that will be hosted by Canonical in its Taipei office in Taipei 101 in order to continue the work Jonas is doing and plan how to proceed with future work items.

As you surely know, in the past weeks Ubuntu took the hard decision of stopping the development of Unity desktop environment, focusing again in shipping GNOME as default DE, and joining the upstream efforts.

While, in a personal note, after more than 6 years of involvement in the Unity development, this is a little heartbreaking, I also think that given the situation this is the right decision, and I’m quite excited to be able to work even closer to the whole opensource community!

Most of the aspects of the future Ubuntu desktop have to be defined yet, and I guess you know that there’s a survey going on I encourage you to participate in order to make your voice count…

One important aspect of this, is the visual appearance, and the Ubuntu Desktop team has decided that the default themes for Ubuntu 17.10 will continue to be the ones you always loved! Right now some work is being done to make sure Ambiance and Radiance look and work good in GNOME Shell.

In the past days I’ve released a  new version of ‘light-themes‘ to fix several theming problems in GNOME Shell. 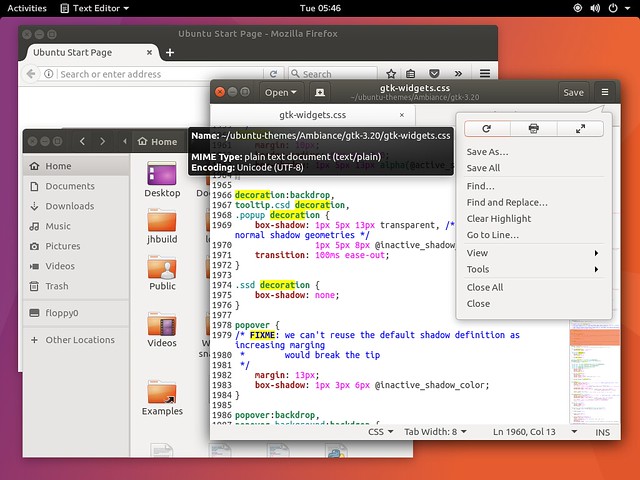 This is already quite an improvement, but we can’t fix bugs we don’t know about… So this is where you can help make Ubuntu better!