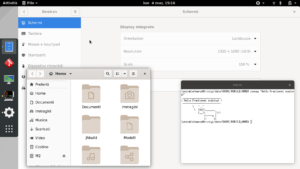 The fractional scaling era for GNOME shell has finally arrived!

The news spread out quite quickly, once last Friday Jonas pressed the button and that triggered the last-second merge for the relevant proposals we prepared for Mutter and GNOME Shell in order to get this available for GNOME 3.32.

As someone might recall, we started this work some years ago (ouch!) and lead to an Hackfest in Taipei, but in between other work to do and priorities which caused this to be delayed a bit. While the first iteration was ready for some time now. But at every review we improved things fixing bugs (like missing scaled widgets) and optimizing some code paths, so hopefully this time helped in serving better quality :).

We’ve still quite a lot of work to do (see these issues for mutter and shell) and some fixes that we have in queue already, but the main task is there. So starting from now the shell will paint all its elements properly and in good visual quality at any fractional scaled value, and independently for every monitor.

Monitors with different scaling values, and a window drawn in between the two

As you might have noticed in the screenshot above, the X11 apps are still not really scaled in quality, while it’s not possible for them all (like xterm there), we need to work for a solution that will cover the legacy applications which does support scaling, and at the same time those which doesn’t want to be scaled at all (games!).

As per what said above, this feature is still considered experimental and then you need to enable it via:

Doing this will allow you to set more a wider set of scaling values under Control Center, display panel.

For what concerns Extensions, most of them should work with no change, but not those using directly the St.TextureCache, as we changed the methods signature by adding a resource_scale parameter.
We discussed weather adding another method instead (as gir doesn’t support default values), but since 3.32 will need anyway a rewrite of most extensions anyways, and since it’s better to have them to behave properly with resource scale since the beginning (instead of blurred contents), we decided not to do it.
So, please sync with this change (and sorry :)).

Putting my Ubuntu hat now, this won’t change much things for default ubuntu experience, since it’s still using X11 (although I’ve something in the works for this too), but people who want to take advantage of this can easily just login using the Ubuntu on Wayland session, enable the experimental setting and profit.

As final world, thanks to people who helped having this in by reviewing and testing the code.